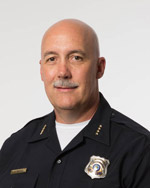 Chief Mike Brown has served in the Salt Lake City Police Department since 1991.  He was appointed Chief of Police on May 3, 2016, and prior to that was the Interim Police Chief from June 11, 2015. He has held many positions throughout the department during his 28-year career, and most recently was the Commander for the Special Operations Bureau.  As the Interim Police Chief, he implemented a Civilian Advisory Board (CAB) in 2015.