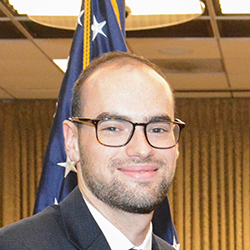 Jason Olin is the Director of Government Affairs for the Major Cities Chiefs Association (MCCA). Jason is a Capitol Hill veteran, having served on the staff of the U.S. House of Representatives Committee on Homeland Security (CHS) for 5+ years. He began as a Staff Assistant with CHS and quickly worked his way up the role of Professional Staff Member/Investigator. A subject matter expert on a broad range of homeland and national security issues, Jason held several different positions within CHS and served on the staffs of the Oversight and Management Subcommittee, the Transportation and Protective Security Subcommittee, and the Full Committee’s National Security Team.

Jason is recognized for his strong background in national and homeland security policy making, having played a key role in multiple significant Congressional investigations and oversight initiatives. He has also written numerous pieces of legislation that were signed into law. Most notably, Jason was the lead staffer for CHS’ Task Force on Denying Terrorists Entry to the United States, which produced a comprehensive report and accompanying legislation designed to address existing vulnerabilities in U.S. government counterterrorism programs.

Most recently, Jason served a Senior Advisor at a small consulting firm focused on homeland security, aviation security, law enforcement and defense. In this role, he assisted clients with navigating the legislative, appropriations, and federal procurement processes.