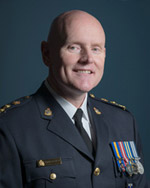 CHIEF CONSTABLE ADAM PALMER took command as the 31st Chief Constable of the Vancouver Police Department on May 6th, 2015. Chief Palmer was born and raised in the Vancouver area.

Prior to joining the VPD, he studied business administration at Simon Fraser University and worked as a correctional officer. Chief Palmer began his career with the VPD in 1987 and since that time has worked in a variety of operational, investigative and administrative areas. He spent the first 13 years of his career working as a patrol officer in East Vancouver. He has also worked in the Jail, the Crowd Control Unit, the Gang Crime Unit, the Organized Crime Agency of British Columbia, Police/Crown Liaison and the Planning, Research and Audit Section.

As a Sergeant, he was extensively involved in the development of the VPD’s Strategic Plan and managed a long-term review of policing operations at the VPD. The Operational Review project examined topical policing issues including the use of overtime, the civilianization of sworn positions, shared services with the City of Vancouver, and the deployment of patrol, investigative and administrative police resources. The Operational Review resulted in improved departmental business practices and the addition of 194 police officers and 95 civilian staff positions between 2005 and 2007. This research has attracted interest from across North America and abroad. Chief Palmer has been invited to speak to other police agencies and international police conferences on the methodology and findings of this project.

As an Inspector, he was the officer in charge of Patrol District 2, which includes the Downtown Eastside, Chinatown, Gastown, Strathcona, Grandview-Woodlands and Hastings-Sunrise neighbourhoods. He was also responsible for port and marine policing for the City of Vancouver, the largest port in Canada. During the 2010 Winter Olympics Chief Palmer was seconded to the Integrated Security Unit as the Venue Commander for the Pacific Coliseum where he oversaw the security for the figure skating and short track speed skating events.

Upon promotion to Deputy Chief in 2010, he was assigned to the Support Services Division where he was responsible for Planning, Research and Audit, Professional Standards, Human Resources, Training, Recruiting, the Jail, Information Management, Information Technology, Communications, Fleet, Facilities, and Finance. He was then assigned to the Investigation Division where he was responsible for all investigative areas of the VPD including Major Crime, Special Investigations, Organized Crime, General Investigations, Forensic Services, Tactical Support and Youth Services.

Chief Palmer has completed numerous policing and professional development courses throughout his career. He holds a Bachelor of Arts Degree (Hons) and has completed two executive leadership programs with the FBI: Leadership in Counter-Terrorism and the National Executive Institute.