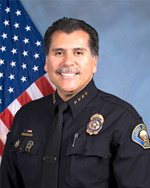 On November 22, 2014, Robert Luna was sworn in as the 26th Police Chief for the City of Long Beach. Chief Luna’s career in law enforcement spans over 34 years, beginning as a Reserve Police Officer with the Long Beach Police Department in 1985. He entered the Basic Police Academy as a Police Recruit in April of 1987, and has since promoted through every rank within the Department, working a variety of assignments. He has extensive experience in the areas of disaster and emergency preparedness, terrorism and critical incident management, and serves on several law enforcement and community based boards.  He currently serves on the Major Cities Chiefs Association (MCCA) Executive Board as the Western Region Representative. He is an active member of the MCCA Homeland Security Committee and is an MCCA Police Executive Leadership Institute (PELI) mentor.

Chief Luna actively promotes the Law Enforcement Code of Ethics, policing in a smart, focused and effective manner, and treating people with dignity and respect. He embraces the concepts of 21st century policing, which provides key elements that help strengthen community policing and trust among law enforcement officers and the communities they serve. He has been instrumental in helping to build and maintain productive and trustworthy relationships with the community, and has received many awards from several community organizations for his civic leadership.

Chief Luna strongly believes in the importance of higher education and made a significant investment in his own education. He is a graduate of the Federal Bureau of Investigation’s (FBI) National Executive Institute, the FBI National Academy, the Harvard University Senior Executives in State and Local Government Program and holds a Master of Public Administration (MPA) from California State University, Long Beach.

Chief Luna is committed to ensuring a safe city for all people, through sound principles, practices, and partnerships.